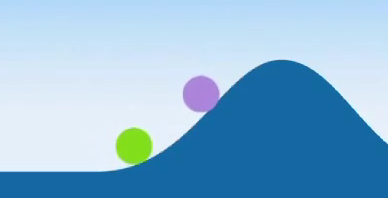 Check out this simple animation. Do you care more about the green dot or the purple dot?

Several cognitive psychologists cooked up this experiment to demonstrate the power of our preference for underdogs (Kim et al. 2008). Here’s the psychologists’ explanation, excerpted from a 2010 NPR Radiolab episode (click here to listen). I think it is wrong.

Another explanation is that seeing somebody (or something) persevere in the face of adversity gives us comfort, hope, reassurance, and inspiration. In other words, there is a moral lesson in that purple circle that accounts for its emotional impact. This is more or less the explanation Murray Smith offers in Engaging Characters (1995). I think it is wrong, too. Just why I think it is wrong and what I think a better explanation might be is the topic of a paper I’m writing. (I gave a preview at the SCSMI conference.) But I thought I’d share these simple animations with you, here, in case you want to test out some other underdog scenarios, for yourselves.

Apropos the green dot, in this one, is it just passively parked there or is it stuck there, with glue perhaps? It makes a big difference in how you see the animation, doesn’t it? Why?